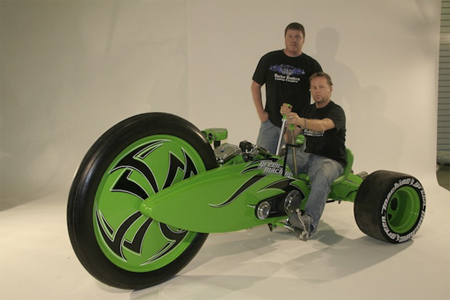 It’s hard when you have to make a choice between what is big and what is powerful. And when you get both, it’s totally something to die for. From trucks to bicycles, it remains the same old comparison. But now, the whole idea of owning a badass, mean machine is reflected on the brilliance of a tricycle. Behold the Green Machine motorcycle trike that is powered by an 80-cubic inch Harley Davidson Evo engine. So imagine sitting on this one, touching speeds of up to 50 miles per hour. If you look at the rear tires, you’ll be able to tell why the trike isn’t street legal, yet.

I just hope there’s enough provision made to contain the shock of an inertia pull, during those emergency brake moments. Else, you’d be seeing stars as the sound of the roaring engine fades out, and so do your invaluables.
Dvice