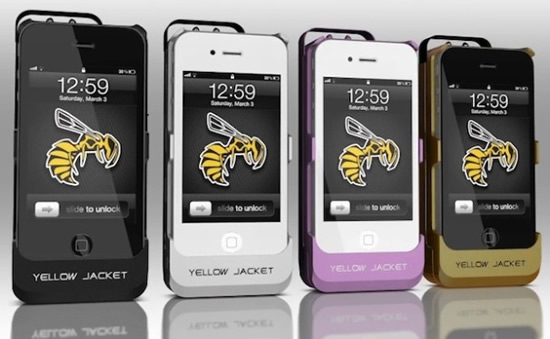 The iPhone has never really amounted to much when it comes to doubling up as a self defense device. Of course flinging the phone at an attacker could cause a few scratches if carefully aimed, and that’s just about all. Designer Seth Froom was recently subjected to an armed burglary in his home and had a bunch of his stuff stolen. Learning from his experiences, this 23-year-old designer came up with the Yellow Jacket case for iPhones, an accessory for your Apple smartphone that functions as a stun gun! Priced at $125 and designed for the iPhone 4/4S, this case packs a 650k volt stun gun and a battery of its own to power up the gun. Capable of stunning a fully grown adult, the Yellow Jacket case could alternatively turn into quite a social menace in the hands of sadistic iPhone users!