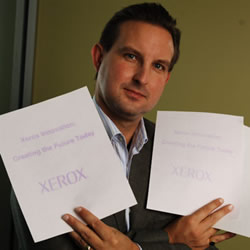 Xerox has announced it has found a way to create temporary images on paper that would self-erase in 24 hours or less. The specially created page can be used over and over again max 50 times. Xerox started work on the special after researchers studied how offices used paper. “You could see there were these documents people only use once or twice or for the day, and then they’re gone. You start to classify them. And from that, you could see that two out of every five [printed pages] are for daily use,” said Paul Smith, a lab manager at the Xerox Research Centre of Canada. The paper is coated with special chemicals and once the paper goes through the printer it is exposed to a light source causing the text to on the paper to fade. It normally takes 16 to 24 hours for the text to fade but passing the paper through the printer quickens the process.

Xerox, is the world’s biggest distributor of cut-sheet paper and North America alone consumes five to six million tons of cut-sheet paper. The product is still in experimental phase and wont hit stores till a few years but we really hope it succeeds as it will save a lot of trees from getting axed.
Source