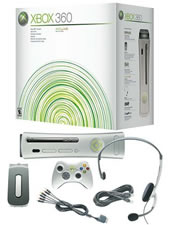 Xbox 360 will be available before Thanksgiving

The next version of Microsoft Corp.’s Xbox game console the Xbox 360 will be available in the United States two days before Thanksgiving, in time for the important holiday shopping season, the company said Wednesday. The Nov. 22 launch of Xbox 360 in North America will be followed by a Dec. 2 launch in Europe and a Dec. 10 launch in Japan. This will give Microsoft a headstart over it’s arch rival Sony Playstation 3 which will hit stores next Spring. The Japanese unit will cost 37,900 yen, or about $345 – slightly less than the $399.99 the company is charging in the U.S., Canada and Mexico. Microsoft had previously disclosed the U.S. price, as well as the European price of 399.99 euros. Microsoft also is selling a scaled-back version, dubbed “Xbox 360 Core System,” for $299.99 in North America and 299.99 euros in Europe. Microsoft has already begun producing “millions of units” at three facilities in southern China.