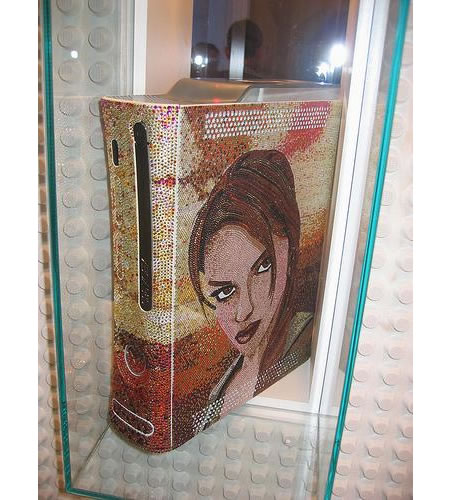 Been missing those curves immortalized by Angelina Jolie? Here’s a chance to get closer to the lovely Lara Croft as you make your way through the dungeons and forests with your Tomb Raider game. You can create just the atmosphere around you, or should I say, around your gaming console. All you have to do is shell out some precious currency bills to get this stunning Lara Croft Xbox 360 Mod. The mod has 43,000 colorful crystals (that at first sight looks really chick). However, the lips of the chick on the mod don’t look as wide and luscious as lady Jolie herself. But then, when you have the cash and 43,000 crystals at your disposal then no one look’s at lips of pretty girls.

The Xbox 360 Case with Lara Croft theme is available only in Germany. It will cost you $11,000 to get your hands on this one. Still considering buying it?
Via – [Gizmodiva]