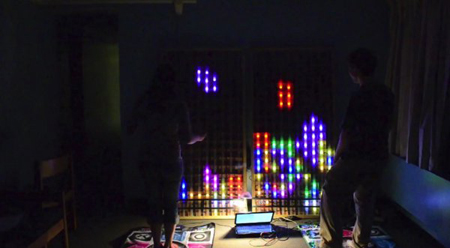 There are those times in life when we wish that everything was larger than life. I felt the same about Super Mario and there it was, a whole arena developed to play the game in first person. Now, it seems that Tetris is one everyone’s mind, as the game to be simulated. Two students from MIT recreated the game on a six-foot LED array that shows the blocks fall in different, trippy colors. The best part – The duo incorporated a pair of Dance Dance Revolution mats to control the falling blocks. Video after jump.

I like the idea of seeing Tetris as a two player game. It’s more fun than taking turns to beat each other’s score. I wonder what’s next in line from Nerdville.
Engadget