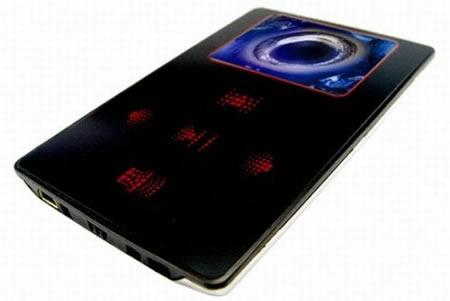 CVSJ-1304 from Chinavision is probably the thinnest portable media player in the world. If the claims by the company are to be believed. The PMP is not only thin but also fully packed with decent specs; a 1.8 inch touch screen that has a resolution of 160 x 128 supporting all sorts of formats, MP4, MP3, WMA, ASF, and WAV. Further more it has an FM tuner, rechargeable battery and USB connectivity. Not to forget the looks are quite sleek. All this and an amazing 4 GB built in memory to store in all your music and videos for just $39.95… sweet.

(Specs and video after the jump)