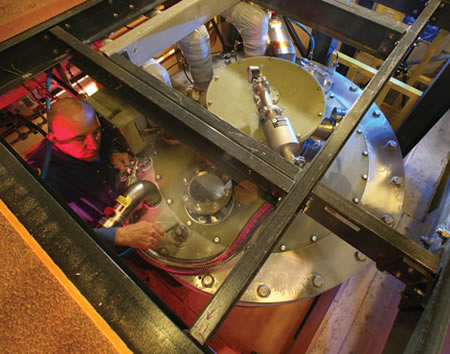 One of the most amazing objects in my science lab were the two opposing poled magnets that always defied gravity. Magnets we all know are at play when we used to post notes on your fridge, but just incase you didn’t know they also help us see inside our bodies like nothing before it with the help of an MRI. The most powerful magnet in the world is being built at the National High Magnetic Field Laboratory, based near Florida State University in Tallahassee. The pulsed electromagnet will reach 100 tesla when completed later this year; this is 67 times more powerful than a typical MRI. Why need so much power you ask? It is the only way to test the properties of newly discovered high-temperature superconductors like iron oxyarsenide, which may improve the performance of MRI machines and high-voltage power lines while lowering their cost. A 100‑Telsa magnet would also let you conduct certain zero-gravity experiments without traveling into space and let you develop magnetic propulsion systems that could eventually replace those that burn rocket fuel. Researchers have reached 90T and are trying to get the most out of the magnet without destroying it in the process. The magnet is made up of nine nested coils of wire. At the heart of the two innermost coils, where Lorentz forces can create pressures 30 times as great as those at the bottom of the ocean.

So far 100 Telsa magnets have been produced only to test the limits of a magnet but are used way below their capacity since these magnets would almost instantly be torn apart by their own forces. The magnet cost US $10 million to develop and just incase you didn’t know what a 100 Telsa is equal to, the explosive force of 200 sticks of dynamite.
Source