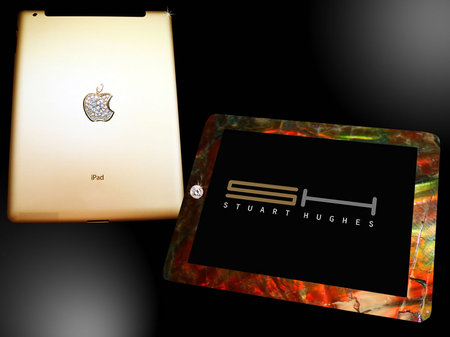 We’ve just started raving about the iPad2 and already bespoke versions are making the rounds. Get ready to be spell-bound with the one-of-its kind, the iPad2 Gold History edition, designed and crafted by Stuart Hughes in Liverpool UK. This isn’t just a Solid Gold iPad or a Platinum iPad or a mere Diamond iPad, but one that’s set to stun you even more. Encrusted with 16.5 cts of ‘I’F’ flawless diamonds, 53 individually set sparkling gems, a solid 24ct Apple logo and the rear section produced again in 24ct gold, this jaw-dropping gadget weighs all of 2,000 grams. The front frame of this iPad is made out of one of the oldest rocks in the world, the Ammolite, sourced from Canada and dating over 75 million years old. If that wasn’t distinctive enough, sections of a 65 million year old T-Rex dinosaur’s thigh bone has been splintered and then shaved into the Ammolite and finished off with a single cut 8.5ct flawless diamond inlaid in platinum and surrounded by 12 outer flawless diamonds. Phew!

At £5 million ($8 million), there will be only two of these rare masterpieces available. And may we add, don’t forget the insurance, just in case you’re planning to splurge. For more information, check out www.stuarthughes.com
Via – [Luxurylaunches]