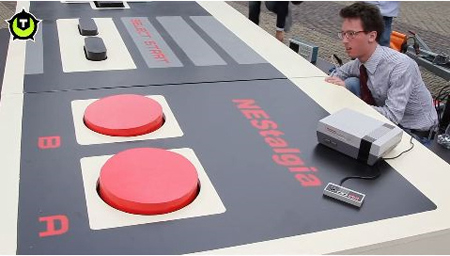 There’s not much point in making devices really huge unless you have an obscene amount of free time, lot of money and are absolutely crazy behind whatever you’re making. All three conditions seem to be just right with student at Dutch University, who put together some amazing ideas that led to the creation of the world’s biggest NES controller. The Nintendo controller here is some 30 times larger than the original remote. The size of the controller requires players to stand on the buttons to action them. It is a 12 x 5 feet replica, with fully functional controls.

The demonstration of the same seems to have gotten off to a flying start with kids trying out Super Mario Bros and Tetris. I wonder how heavy you have to be to action the functional controls on this controller.
Kotaku