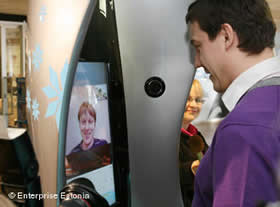 Lennart Meri Tallinn Airport in the capital of Estonia is home to the worlds first Skype phone booth. Instead of a computer terminal the booth has a touch screen which has an interface similar to Skype’s home application. The user is automatically signed out of their account when they leave the booth to ensure account security. The Skype booth is supposedly a symbol to the country’s flourishing high-tech sector. I would rather look for a web terminal and shoot off a few emails rather than Skyping.
[Nycaviation]