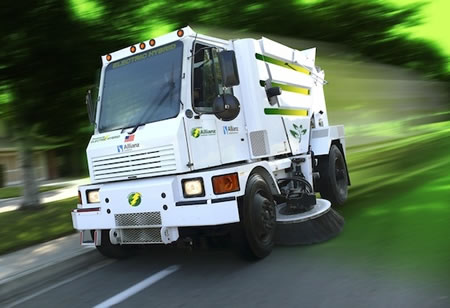 Meet the World’s First Hybrid Street Sweeper. Dubbed the Allianz 4000, this new hybrid vehicle is all set to make an impression as it cleans the streets of New York City. The Allianz 4000 hybrid sweeper, currently in use only in New York City, features a 200 horse power diesel engine and two 12 volt lithium-ion batteries. Allianz estimates a 40 to 45 per cent fuel savings over a diesel-only sweeper. “A sweeper is not a typical light duty truck and therefore we need to be able to accommodate many different functions including transport, sweeping, dust control, and emmission compliance,” said Allianz sales manager Chad Bormann.

The sweeper also has the ability to operate using a smaller single diesel engine running at lower RPMs, resulting in savings against any street sweeper that requires an auxilliary engine in conjunction with the chassis engine to drive and operate the sweep functions. While the per-unit cost of the sweeper has yet to be determined, Bormann says that aside from fuel savings, emissions standards make the hybrid an attractive choice for cities whose fleets must meet certain targets set by law.
In order to comply with laws in certain states that require street sweepers to be able to travel at highway speeds, the Allianz can reach speeds of up to 60 miles per hour; however unlike all other sweepers can only clean roads between 3 and 7 mph.