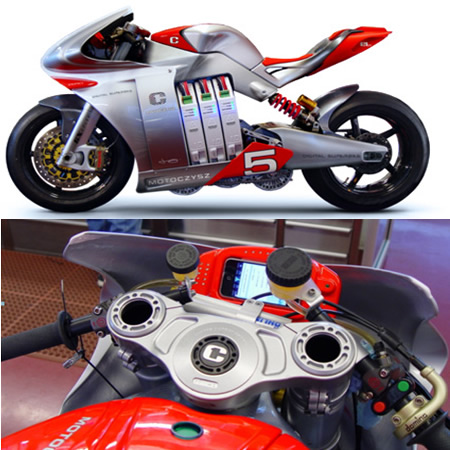 Apple’s iPhone is in green limelight again and this time it is playing the role of cherry-on-the-icing as it is seen on the MotoCzysz E1pc, the world’s first Digital Superbike. The green digi-beast is all set to debut on June 12th on the Isle of Man, United Kingdom and race in the first ever Zero-Emission Carbon-Free TTXGP Motorcycle Grand Prix. This high-tech electric bike can zoom up to 120mph in just 7-8 seconds without leaving any carbon footprint. However not much is revealed about the E1pc, except for the obvious iPhone on the dashboard. It comes loaded with 10 battery packs and three motors to participate and hopefully win in world’s first zero emissions road race. Come Friday and the green world will bow down to the winner of this green race.
Via – [Greenlaunches]