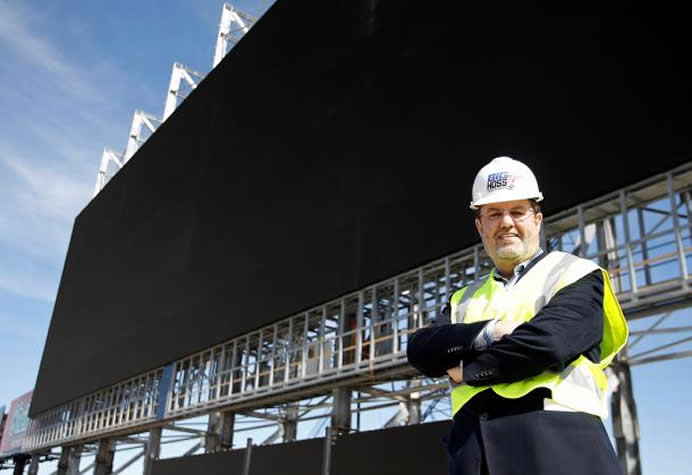 While the rest of the world is desperately trying to turn a shade greener, Texas thinks otherwise. Instead, this American state has decided to kick off its shoes, lay back and enjoy the sheer awesomeness of the world’s largest television screen that it now plays home to. Called the “Big Hoss” TV, this piece of giant technology was turned on for the first time recently at the Texas Motor Speedway in Fort Worth. Built by Panasonic, the television screen measures 218 feet wide by 94.6 feet tall, that’s roughly longer than a Boeing 767 and nearly as tall as a seven storey building!

Simply put, this Panasonic Big Hoss colossus is a 2,852-inch TV! The display features 20,633.64 square feet of HD LED lights capable of broadcasting 4.8 million pixels and 281 trillion colors. The TV boasts a 140-degree viewing angle and requires a crew of five people to operate it. Knowing Texas, Panasonic has built the screen strong enough to withstand winds of up to 120 mph, hail and more. While we aren’t sure just what will be shown on this massive television screen on a day to day basis, we simply can’t stop imagining just how big the remote control of the Big Hoss is!