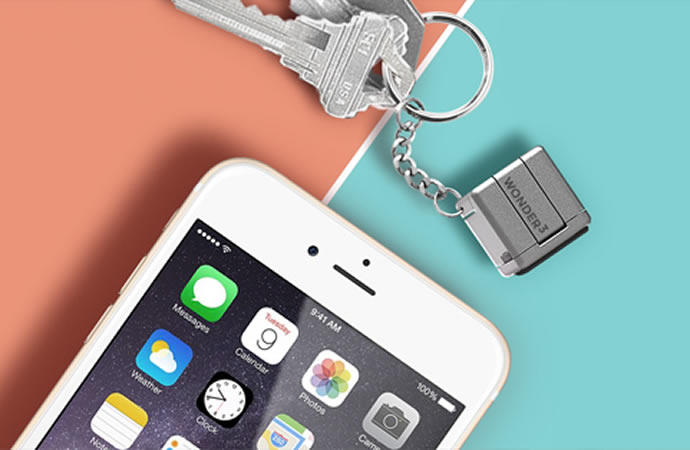 I’m all for all-in-one type gizmos that offer users all kinds of connectivity for devices on the go. And more so if they come in compact, easily portable sizes. Take for example this handy little gizmo called the WonderCube (a very apt name as I’ll explain later on) that’s featured on Indiegogo. It’s got all you’ll every need for your smartphone and its tiny enough to slip onto your keychain ring!

The WonderCube is a 1 inch (each side) device that has sections that flip open to offer all kinds of smartphone support. Let’s start off with the basics, depending on the type of phone OS you’re using you can opt for an iPhone or Android, BB, Windows type option wherein a Lightening or micro USB (respectively) will be available at one end and a standard sized USB port on the other which lets you connect the Cube to your phone and PC or wall socket for data transfer or charging respectively.

The Cube also features a MicroSD card slot (support for 16, 32, 64GB cards) that lets it act as an OTG storage module to expand your device’s memory. The third function is a small LED featured on one side to help you look for things in the dark. Function number four is that it can be used as a mini stand as it has micro suction caps on a side that can stick to your phone and let it lean against the desk. If you’re running out of juice, just pick up a standard 9V battery from the nearest general store, stick it into the WonderCubefor, plug it into your handset and voila, a quick charge.

The device is available for Preorder on Indiegogo’s crowd funding website. At the time of writing this post, only the standard Black and White colored options are available for the early-bird preorder price of $39 and $49 respectively. Other color options will also make it out based on the kind of investment the company receives. The company even says they’ll customize the device with your name if you prefer. All in all it has plenty of potential and to quote that old adage – most good things come in small packages. The WonderCube could be your smartphones very best friend.