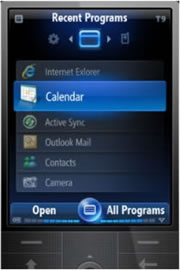 Microsoft has reportedly delayed the release of Windows Mobile 7 until the second half of 2009. The company has informed cell phone makers and partners that the operating system update, originally expected during the first quarter, will not be ready. Microsoft has never publicly cited a release date for Windows Mobile 7. Instead, an interim update to Windows Mobile 6.1 — announced in April, and apparently still on track for release by the end of this year — will allow its bundled Internet Explorer browser to view web pages full-screen, without menu bars and other “chrome.” The update will also provide Adobe Flash and Microsoft Silverlight support, as well as compatibility with H.264 video. The Windows Mobile 7 is said to focus on touchscreen and motion gesture so it could compete with the iPhone and the latest addition to their competitors.
Source