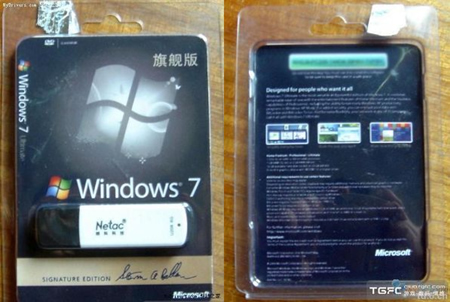 Sure piracy is always an issue and sure it’s always high but that’s only because the pirates always mange to offer you premium products for a third of the price sometimes. No one’s spared, least of all software developers like Microsoft who already had problems with their newest release of Windows 7 being pirated and cracked all over the place. However the techno pirates have taken things a little further with Windows 7 by offering the new OS not on a CD anymore but on a USB pen drive now. The idea is that the USB version would run faster than the DVDs which seems to have a certain amount of merit.

What really makes this pirated version stand out amongst the many many many others is that apparently it comes with packaging that showcases Microsoft CEO Steve Ballmer’s signature on it. The Microsoft OS is being sold in China illegally on 8GB pen Drives for about $14. Piracy is not going anywhere it seems and the pirates are getting bolder all the time. It seems like the mentality is if you’re going to pirate something, you may as well go all the way and make it as believable as possible.