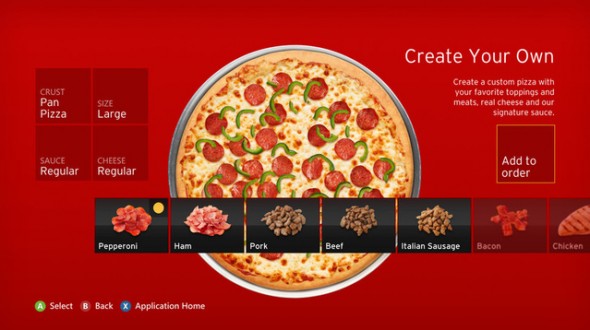 Microsoft have tied up with Pizza hut to roll out an interesting new app. This unique offering will cater to gamers who either ignore their meals altogether or cannot stop munching on a greasy slice of pizza all day. The pizza delivery service will make it simpler for gamers to order over the phone, online, or through a mobile app. You can now use the Kinect sensors to build your very own pizza “hand motions or voice commands,” according through Xbox’s representative, Larry Hryb. This seems to be a likely means of having hardcore, obese gamers, put on some unwanted kilograms as they think food with every gesture.


Sony had introduced a pizza-ordering function into Everquest in 2005. So this idea isn’t really a novelty of sorts. Gamers have more often than not neglected their meals and indulged in non-stop gaming sessions. Wedbush Securities research analyst Michael Pachter tells Polygon that it’s “not at all important,” adding, “I can do it with my cell phone, don’t see how it makes things easier to do so through the Xbox.”