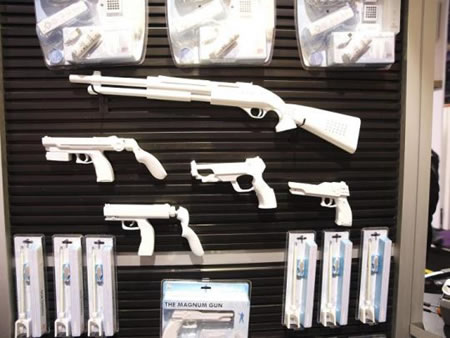 What make playing Wii fun is the fact that the actions involved while playing the game are pretty realistic. Like in car racing, when you add the wheel to the Wiimote, it makes you feel like you are really cruising the highways. For you to enjoy the games where firing a gun is involved, Brooklyn-based company CTA Digital is coming out with some heavy-duty Wiimote attachments. From the pistol-like Magnum Gun to the Sub-machinegun-like Buzz Gun, CTA has plenty of Wiimote-gun attachments to choose from. The Shot Gun for Wii displayed at the CES Showing was pretty bulky, so hopefully the final version will be a lot lighter. Many of the displayed models boast of a built-in laser pointer, which is actually useless when playing the Wii. Other Wii accessories, like Wii boxing gloves, Wii glowing swords, Wii fishing rods, Wii pool cues, and even Wii cooking utensils, were showcased.

The Airplane Navigator, a flight yoke accessory in which you fit the Wiimote and Nunchuck… is quite farfetched actually because so far no game has been developed where you can use the two together in the manner suggested by CTA. CTA has not yet disclosed the prices of the various Wii accessories, but a spokesman said that units were already being shipped to retail outlets.
Source