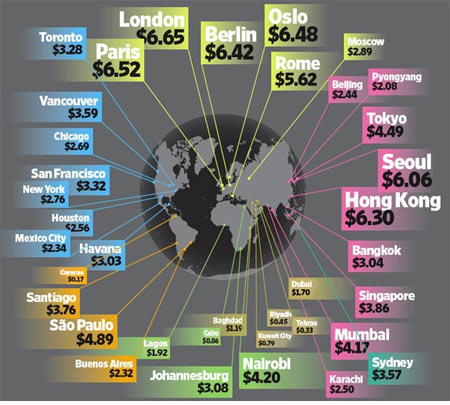 What it costs to tank up around the World

A reality check will keep you grounded and thankful that Gas in America doesn’t an arm and leg as it does in most countries. In Asia, Hong Kong pays $6.30 per gallon, with Seoul, South Korea averaging the almost the same. Europe too shells out more than us. London, Berlin, Oslo, and Paris dish out $6 a gallon.

However on the flipside we see that places like Kuwait City in the Middle East and Tehran, Iran, pay fewer than 79 cents for their gas. Caracas, Venezuela pays only 17 cents per gallon and stands at the cheapest place to get gas.
Source