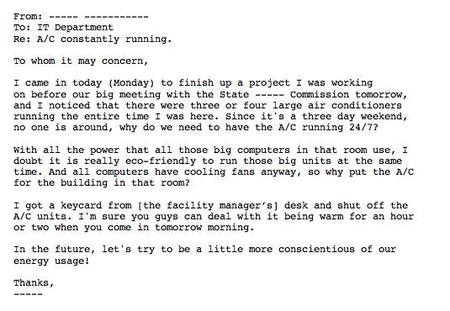 What happens when you turn the AC off in the server room?

Some time back there was a major disaster at The State’s Technology Services Division. Details were sketchy but for two full days, employees of The State were unable to logon to their computers or access email, and that this caused business within The State to grind to a halt. This started when employees of The State came in to work following a three day weekend, they found their workstations overloaded with “cannot logon” and “Exchange communication” error messages. The server room was blistering at 109 degrees Fahrenheit and was lying with dead and dying servers. The initial guesses for the disaster was the failure of primary, secondary and tertiary air conditioners all at once. But after cycling the power the A/C’s were working fine. The employees worked day day and night to order new equipment, build new servers and get everything on track. After hundreds of overtime hours and 200 thousand dollars worth equipment they managed to bring everything back online. When the Exchange servers were finally restored, the following email finally made its way to everyone’s inbox, conveniently answering the “why”

As for the employee who sent it, he decided to take an early retirement.
Source