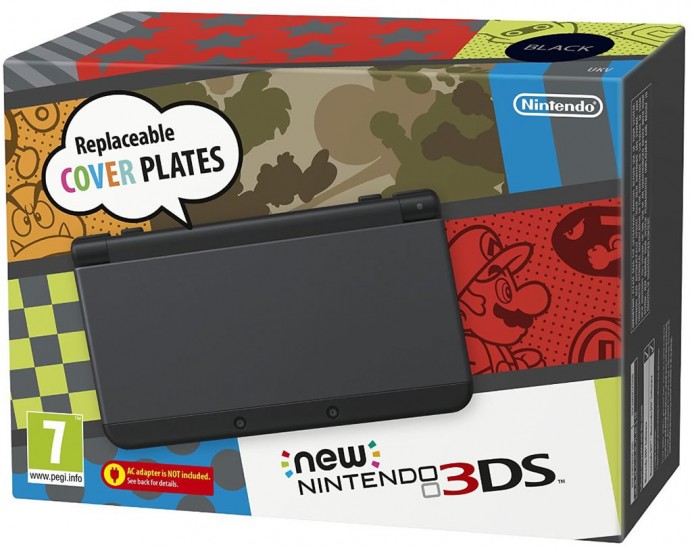 What Makes the New 3DS So New?

Nintendo have released new versions of the 3DS and 3DS XL, and they’re being surprisingly up front about it. Rather than trying to sell it as the next-next generation handheld, they’re simply calling it what it is: The New 3DS. They’re not even hiking the price up, the RRP for the New 3DS and its XL sister is very much the same as their older siblings (although you might find stores are choosing to sell the old 3DS’s at a far more marked down price now).

So what is it about the New Nintendo 3DS & 3DS XL that makes them so, well, New?

Appearances
Let’s start with the purely cosmetic stuff. The old 3DS was shiny and reflective and came in most colours under the rainbow. While we’re sure that eventually Nintendo is going to be offering us a Technicolor buffet of potential New 3DS covers, the current range is matte black or white. It’s actually a good look for the handheld and makes it feel a bit more like a premium electronics product, and a bit less like a toy.

More importantly, the New 3DS has a better hinge. The old 3DS was well put together, but it would wobble like anything at the slightest provocation. This time the hinge is a bit sturdier, and it feels a bit less flimsy in your hands.

The 3D
Now we’re getting to the meat of the matter. After all, it’s not the New 2DS (although I’m sure that’s coming along soon). The 3DS was revolutionary. It was convincing, glasses-free 3D that worked beautifully so long as you weren’t prone to headaches and were capable of keeping your head absolutely still at all times.

The New 3DS uses the handheld’s camera to track your head movements and alter the image accordingly, and while it can still be fooled if your head is partially obscured by, say, a bit of pillow while you’re playing it on the bed, it corrects itself quickly. However the big plus is that you can now play your 3DS on public transport. We truly live in a golden age.

The Processor
Nintendo is being habitually secretive about the insides of the New 3DS, but it’s promising faster downloads, quicker loading games and a more responsive user interface. While a lot of those new improvements may not be immediately noticeable if you don’t play your 3DS with a stop watch in hand, the download speeds are certainly a big step up, with games arriving on your hard drive in minutes rather than the usual hour or more.

The Button Layout
In many ways this is the most important aspect of the 3DS. After all the time we’ve spent putting into learning split second reflexes on the old 3DS layout, is Nintendo now going to make us relearn everything from scratch? The biggest change has to be the addition of a new C-stick, which combined with the improved 3D makes looking around the game environments a good deal more satisfying.

There are also some new shoulder buttons to accompany the original single set on the old 3DS, making it feel more like an Xbox or PS controller than before, which isn’t necessarily a bad thing.

All in all, the New 3DS isn’t a revolution, but it doesn’t claim to be. Instead it’s a solid workover of everything that made the original 3DS appealing, fixing a few bugbears along the way.