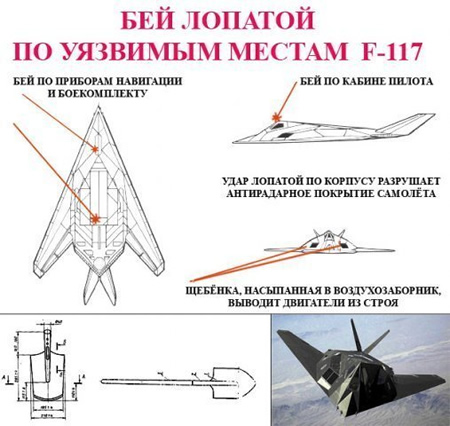 This has got to be a joke, but it’s out there anyways so maybe there’s some truth top it but here it is anyhow. One site has a recent post that shows off an apparent diagram of an F117 stealth fighter that has a few points high-lighted. The weird part is that points on the diagrams, when translated (not by me, don’t speak the language) starts off with the title reading something to the effect of – “Hit with shovel all the weak spots of F117″. Other apparent notes talk about things like – Hitting the navigation dashboard and armaments controls with a shovel and even using one to put stones into the engine. While I’m of the opinion that this is some sort of joke, it could also be a genuine mix up. Perhaps the picture is right but the info is about some sort of old fashioned locomotive.
Englishrussia