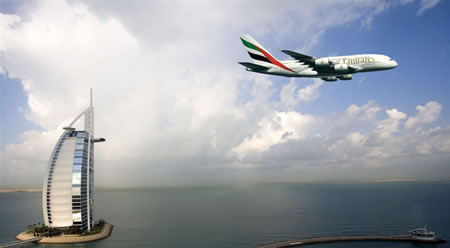 Wealthy Arab buys Airbus A380 for personal use

Talk about lavish lifestyles and the first thing that comes to your mind are the Pharaohs ruling the land of black gold, they stay in palatial mansions decked up with all the gizmos one can think and parked in their garage is a Maybach, an Enzo and everything in between. When it comes to air travel they dont travel in mediocre first class or chartered flights but in their private jets. Bombardiers and Gulfstreams are also passe as the super rich are going for 747 Jumbo’s and 787 Dreamliners for VIP use. Recently an uber rich Arab signed a letter of intent with Airbus for an A380, the $300 million plane is designed to seat 853 passengers in two decks. But keep in mind this is for personal use as the Arab will spend an additional $100 million on the interiors and convert it to a flying palace. New York-based jet-interior expert Edése Doret who will be designing the A380 for the customer says it will include two dining halls, one 600 foot master bedroom, game room, lounge with giant curtains that will mimic tents of the Arabian desert, and a fiber-optic mosaic that will depict a shifting desert scene. Plas include a whirlpool tub (first in the air) with a rapid drainage system that can empty the standing water in seconds to a tank in the cargo hold and a missile defense system too.
(Video after the jump)

The major problems with large planes is they are too big to land at high-end jet ports as many have too short runways and lack the equipment to handle such behemoths. Last but not the least the infamous delays plaguing the A380.