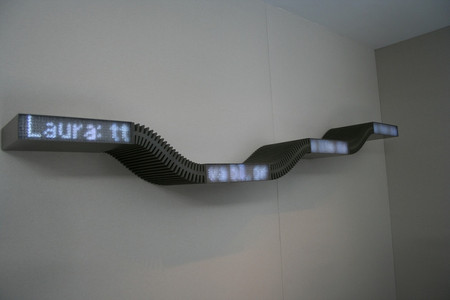 WaSnake a shelf that displays SMS and News

Made from wood and elastomer WaSnake is a shelf whose topology can be reconfigured to suit any specific space or whim. Developed by Jean Louis Frechin and showcased at the International Milan furniture show it is also a luminous digital object and a device for relaying discreet information in the home – comments, addresses, the useful and the playful. WaSnake displays SMS messages sent to the home address as well as news-sheets from the user-selected RSS. It houses a cluster of coloured LEDs and optical fibres that form a screen. The system is linked to a computer and serves as an interface for selecting and creating information and communication channels. It is also an interface for direct physical contact, by which users choose various display protocols. The operating software is composed of independent units (Widgets) each linked to parts of the shelf.
(One more image after the jump)

WaSnake has two objectives: – propose a communicating object that enables a discreet, fluid and visual experience (digital matter) in the home context; – create a hybrid, multi-functional object that is both physical and digital.