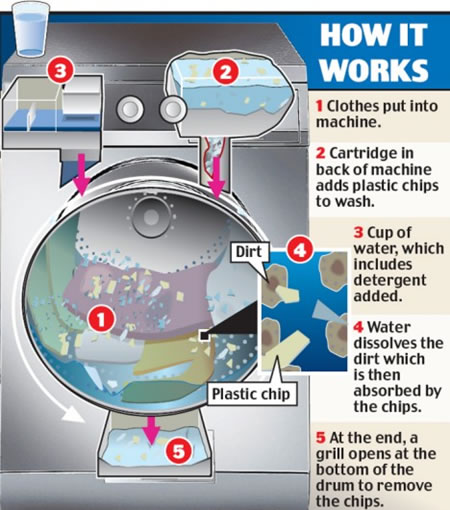 Washing Machine that Uses Only One Cup of Water

Imagine using a washing machine that requires only 1 cup of water to get through the load, also it leaves the clothes “virtually dry.” British inventors have developed such a washing machine and their technology uses less than 2 % of the water and energy of a conventional machine, this could save billions of liters of water each year. Created by academics at Leeds University, the machine works by using thousands of plastic chips that are each about half a centimeter in size, to absorb and remove dirt. Around 44lb (20kilos) of the chips are added to each load, along with a cup of water and detergent. Roll over to figure out how it works.

This how the machine works:
During the washing cycle, the water is heated to help dissolve the dirt, which is then absorbed by the plastic chips. The chips should be removed at the end of each wash, but can be used up to 100 times – the equivalent of six months washing. The technology, dubbed Xeros, is already being compared to the Dyson bagless vacuum cleaner, which revolutionized the home cleaning industry when it was first released in the mid-1990s.
Source