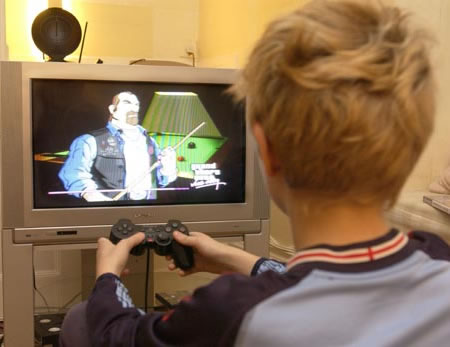 Warning: Gaming could be hazardous to your ward; Cigarette pack styled warnings on games

Expect a label like this to appear on videogames, forewarning parents about the side effects of gaming. California Congressman Joe Baca is gunning for a new bill called H.R. 231, a bill that would require that warning labels be placed on any game rated T (13 and older) or higher by the ESRB. Baca’s bill is titled “The Video Game Health Labeling Act of 2009.” Call them stray incidents or what; games do have an effect on the children and impressionable minds. As a gamer and mom myself I would probably go with this in theory. But in reality its in the hands of the parents, they need to monitor what they kids do. One man’s medicine is another’s poison!

Rep. Baca’s office has issued a press release on H.R. 231, including these comments from the Congressman:
The video game industry has a responsibility to parents, families, and to consumers – to inform them of the potentially damaging content that is often found in their products. They have repeatedly failed to live up to this responsibility. Meanwhile research continues to show a proven link between playing violent games and increased aggression in young people. American families deserve to know the truth about these potentially dangerous products.
We must hold the video game industry accountable and do everything in our power to ensure parents are aware of the detrimental effects that violent games can have before making decisions on which games are appropriate for their children to play. I am proud to introduce the Video Game Health Labeling Act of 2009, and am hopeful my legislation can work to stop the growing influence of violent media on America’s children and youth.
Source