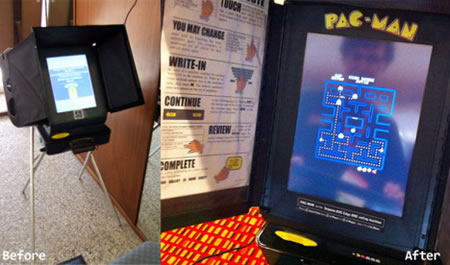 If you’ve ever wondered what happens to voting machines once the election fiasco is over then here’s one of the many things. This Sequoia AVC EDGE voting machine has been well ‘tampered with’ to accommodate something no one will complain about: Pac-Man. The machine has been reprogrammed by formatting its memory card, installing DOS and MAME. Well, that was just enough to get the game started on what would otherwise be a mundane piece of political equipment.

If you’re wondering who got hold of this machine then fret not, it isn’t a prankster who did this but a bunch of security researchers at the University of Michigan who made the whole thing possible.
[Ubergizmo]