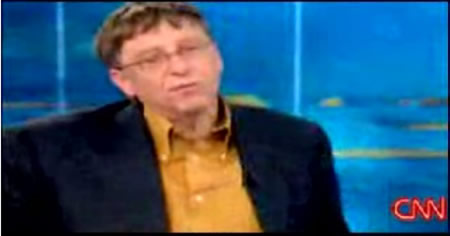 CNN’s Miles O’Brien interviewed Bill Gates about the debut of Microsoft’s new operating system, Windows Vista. The most interesting part of the interview was when Bil lwas confronted on how “Mac-like” Vista how is.
O’Brien: Frankly, a lot of what I see here, um, seems to mimic a little bit [Apple’s Mac] OS X. Were you going after a specific look there, the Mac look, or?
Gates: No, no, no. Actually, uh, the, we’re ahead [slight pause] on a lot, uh, there’s whole areas where we’ve innovated like Media Center and tablet, uh, that, uh, no one else is doing and the parental control, that’s the first time that’s been done. Even in this photo area, you know, we’d love to have you compare how we’ve done, make it easy to make a DVD, edit high definition movies.
(Video after the jump)