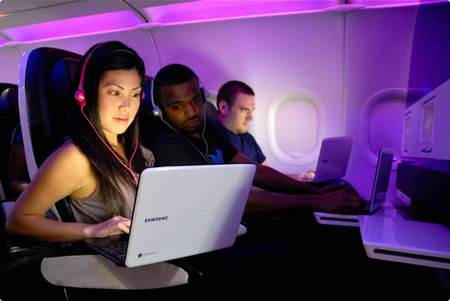 Virgin America hands out Google Chromebooks for in-flight use

Google has partnered with Virgin America to dish out Chrome books to their passengers for testing on select flights. So anybody who is flying on on Virgin America between the airline’s home airport in San Francisco and either Boston, Chicago O’Hare or Dallas airports between July 1 and September 30 will get one of these and they can see what it is like using the free in-air WiFi pass.

All airlines these days do decent levels of in-flight entertainment but have something like Chromebook in your hand is an excellent way for Google to garner attention for their newest offering. One can pick it up at the designated areas in the flight called “Chrome Zones” and on your way back you got to drop it off in the same place. Virgin America is trying to sweeten the deal here with a contest where one lucky winner wins a Chromebook and a bunch of other goodies. The concept of “Chrome Zone” does sound a bit pushy but if that really pans out well for these guys, who cares?!
[Engadget]