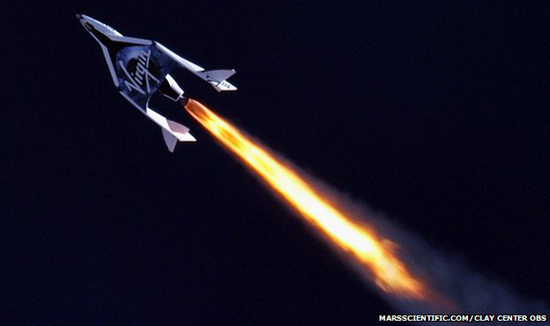 We were all raving about the amazing prospect of being able to travel through space, thanks to the mighty and thoughtful Sir Richard Branson. The spaceship, known as SpaceShipTwo or SS2 made its maiden powered flight, finally. It was dropped from a carrier aircraft many feet above California’s Mojave Desert and ignited its rocket engine to enable a supersonic voyage for a few startling seconds. The SS2 has been space borne over twenty times but this is the first time its hybrid motor has been ignited. The mere 16-second burn propelled it beyond the sound barrier to a speed of Mach 1.2.


A ticket to space on the Virgin Galactic SS2 could cost people a whopping $200,000. But for some, it’s one mean experience that’s worth the trip. A well-doing family could well splurge a million dollars on a single brief ride.
BBC