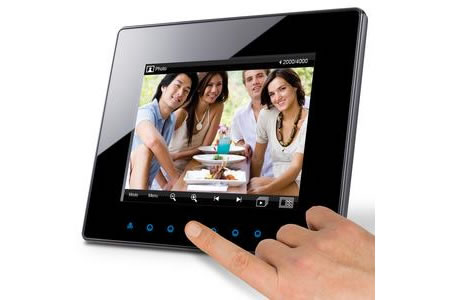 Christmas is getting closer each day, the shopping frenzy may not be as crazy as the last year considering the market gloom but gifting a digital photo frame doesn’t seem that expensive. Viewsonic ‘s two 8-inch models, the DPG801BK and DPG807BK, feature a new “SwifTouch” touch-screen interface that illuminates hidden control buttons when needed and provide a clutter- and smudge-free display. They also include 512MB worth of internal memory and feature an 800 by 600 display (4:3 aspect ratios) and a clock/calendar function. Both the ViewSonic’s digital photo frames support MP3 music to play songs in the background while watching JPEG and BMP file formats.

However, the DPG801BK can display Motion JPEG videos. The DPG807BK adds support for MPEG-1 and MPEG-4 video. Both frames will retail for $129.
Source