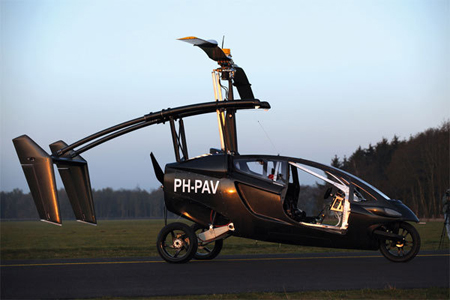 The PAL-V flying car has been long overdue now, so we’re relieved to see the first test of the terrestrial and air vehicle, in the Netherlands. It’s called the Personal Air Land Vehicle, if you’re wondering about the name and flies like a gyrocopter. At the rear, it’s rigged with a push propeller that folds and an auto rotating rotor to top it up. It can fly a good between 220 miles and 315 miles and drive for up to 750 miles. This is more than impressive for a flagship hybrid vehicle. Though it works quite fine on gasoline, the developers are gunning for biofuels in the future. Video after the jump.

It seems that the deliveries of the car will commence not before 2014. Investors are being invited to join in this venture and we’re not doubting the probably success of this whole deal.
LA Times