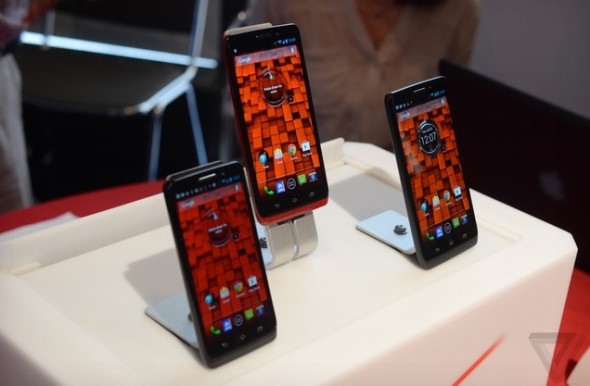 Verizon has goodbye to all other Droid makers, they’re sticking to Motorola Droids from now on

With the latest release of a new range of Droid devices from Verizon, the provider has decided to make working wit Motorola a solo act. Three new Motorola made smartphones viz. the Droid Mini, Droid Ultra, and Droid Maxx launched in New York today will be the Verizon’s latest flasgships and will cement the exclusive tie up with the Google bought company, Motorola. Going forward, No other manufacturer will be bale to lay claim to the ‘Droid’ title for Verizon. In a nutshell, Motorola and Verizon are now in an exclusive partnership to offer their customer’s smartphones bearing the famous and at one time controversial series name i.e. ‘Droid’.


With the launch of these new hands and the tie up with the big Moto, the HTC and Samsung Droid devices will be off shelf. The provider’s vice president of marketing operations, Jeff Dietel told some sources that the latest trio of smartphones from Motorola will actually be kept on Verizon’s shelves longer than any of the predecessor Droid models as the aim was to push the Motorola tie up. Both companies are banking on the fact that the Droid branding has fared quite well with their consumers and hopefully these three new smartphones, equipped with goodies the likes of which we can expect to find the upcoming Moto X, will make a large impact on sales and figures.