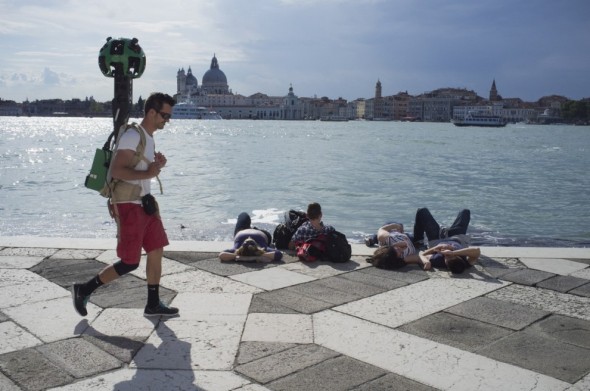 A little while ago we spoke about Google’s Trekker Backpack Street View camera that the company was willing to loan to adventurers who had a good enough reason to use. The 33 (or 42lbs) pound backpack system is perfectly designed to go into places that Google’s Street View vehicles cannot and hence we come to the latest news on that front. To get the Street View done for beautiful Venice, Italy, Google’s lunky old cars just wouldn’t work. So the company decided that it was time to break out the ole backpack, strapped it onto some of their employees and told them to take a walk… around Venice.


The backpack uses the same technology as the cameras fitted onto their specially equipped cars. Using multiple, directional cameras, that take pictures at 360 degrees from all angles, software stitch them together to give us actual Street Views of locations. This creates a fully circular panorama of the surroundings giving travellers a much closer look at what’s what instead of just looking at symbols and lines on a map. Almost 50 countries, with Venice now included are available for viewing on Google Street Views. The beautiful canals, narrow cobbled streets and by lanes will now become part of the Google Maps Street View world and allow fellow explorers to see things form a whole new perspective. Has your city been snapped yet?