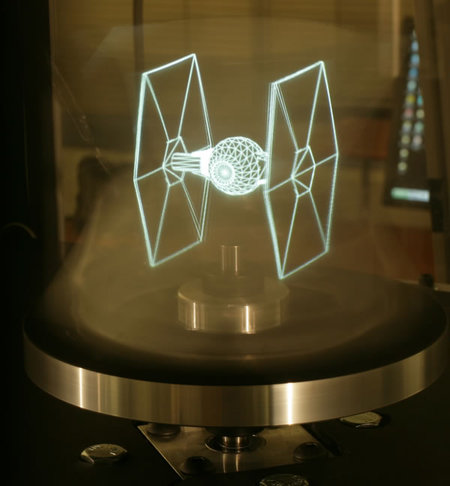 The ICT Graphics Lab at USC has created a low-cost volumetric 3-D display, which is really impressive. Apparently the process requires spinning mirrors, high-speed DLP Projections, and very precise calculations that figures out the correct axial perspective needed for a 360-degree image. The process even takes into account a viewer’s positioning. Small viewing areas, high costs and the viewer disconnect with blurry optical illusions, have bogged down earlier attempts by several companies. But the USC project is different and quite realistic. When projecting video frames into a rapidly spinning mirror, close to 5,000 individual images are reflected every second within the surface area and come together to create a real-space three-dimensional object. Because the images projected from the mirror jump out “toward multiple viewpoints in space,” the USC team created a formula that renders individual projections at different heights and traces each projected beam back to the display area to find the correct position of the viewer.

The system also updates itself in real time (at 200Hz), adjusting to the height and distance of the viewer, producing an image that will “stay in place,” (or rather, that “adjusts its projected perspective.”) With this, every person in the room will be able to have a correct POV of a holographic image, like that of the TIE fighters in the image above. The system also allows simultaneous viewing, hence negating the use of uncomfortable glasses.