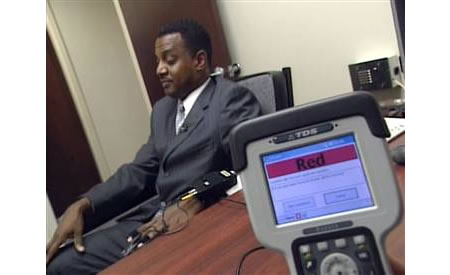 US troops to get Portable Lie detector.

The Pentagon will soon be issuing new hand-held lie detectors this month to U.S. Army soldiers in Afghanistan. The new device, known by the acronym PCASS, for Preliminary Credibility Assessment Screening System, uses a commercial TDS Ranger hand-held personal digital assistant with three wires connected to sensors attached to the hand. An interpreter will ask a series of 20 or so questions in Persian, Arabic or Pashto: “Do you intend to answer my questions truthfully?” “Are the lights on in this room” “Are you a member of the Taliban?” The operator will punch in each answer and, after a delay of a minute or so for processing, the screen will display the results: “Green,” if it thinks the person has told the truth, “Red” for deception, and “Yellow” if it cannot decide. The Army has bought 94 of the $7,500 PCASS machines, which are sold by Lafayette Instrument Co. of Lafayette, Ind. The PCASS cannot be used on U.S. personnel, according to a memo authorizing its use, signed in October by the undersecretary of defense for intelligence. Polygraphs have sparked a fierce debate for at least a century. While supporters claim the devices are reliable, the National Academy of Sciences allows only that they’re “well above chance, though well below perfection.” Polygraphs are not allowed as evidence in most U.S. courts, but they are routinely used in police investigations, and the Defense Department relies heavily on them for security screening.

How does a device that is tested on instructors who are experienced law-enforcement polygraphers, and the participants are all American, English-speaking and college-educated be effective to an illiterate Iraqi? The Advanced Physics Lab at Johns Hopkins University wrote the algorithm or computer program that makes the decisions. Besides the Army, other branches of the U.S. military have seen the device and may order their own. The total cost of the project so far is about $2.5 million.
Source