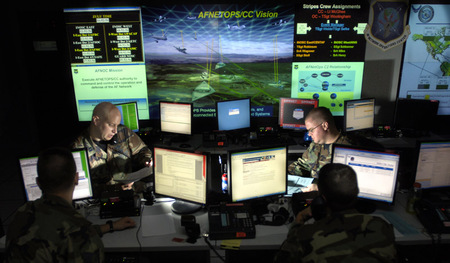 US initiates Cyber Command – To launch and defend cyber attacks

“What do we consider to be an act of war in cyberspace?” asked Lt. Gen. Robert J. Elder Jr., who heads the Air Force’s cyber operations command. “The military is not going to tend to do that (use virtual strike capabilities) until you cross some line that constitutes an act of war.” U.S. military officials seeking to boost the nation’s cyber warfare capabilities are looking beyond defending the Internet: They are developing ways to launch virtual attacks on enemies. First, the military will have to figure out the proper boundaries. Initial uses likely would be limited to diverting or killing data packets that threaten the nation’s systems, the way the military may intercept a foreign ship carrying arms in international waters. In the future, the military might rely upon network warfare to disrupt an enemy’s communications system, replacing the need for conventional weapons like bombs. The military would be restricted by the same rules of engagement – such as requirements for a formal declaration of war – that apply to conventional attacks. As the military increasingly relies on networks and computer systems to communicate and coordinate conventional operations, the U.S. Air Force is planning to establish by October a Cyber Command for waging a future war that is fought not only by land, sea and air but also in cyberspace. Hackers with a foreign government or terrorist group potentially could bring down military and civilian Web sites using what is known as a denial-of-service attack – flooding the computer servers with fake traffic such that legitimate visitors can’t get through.

Enemies also could look for security vulnerabilities to break into key systems that run power plants, refineries and other infrastructure. Forensics capabilities also are being developed, he said, to identify who is attacking, even if the attacker tries to hide by spoofing the identity of packets and rerouting them through intermediary computer servers. That way, the United States can make a credible threat of retribution. The Chinese government has been suspected of using the Web to break into computers at the Defense Department and other U.S. agencies in what was dubbed Operation Titan Rain. After which several defensive initiatives aimed at deterring cyber attacks on the United States have been outlined.
Source