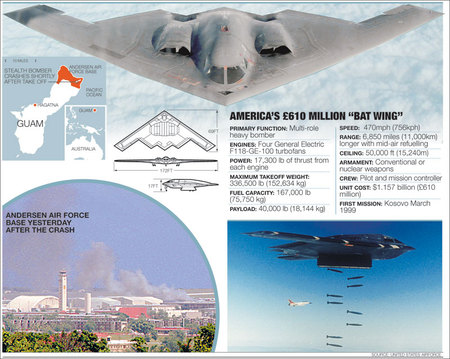 US B-2 stealth bomber crashes in Guam; fleet grounded

The entire B-2 stealth bombing fleet has been grounded after a one of the jets crashed near a military base in Guam. The stealth bombers played an important role in all major conflicts since 1999. The £610 million plane crash has been touted as the most expensive single aircraft accident in history. Although it’s not been confirmed but officials feel that the crash was caused by either mechanical failure or human error. However they have grounded the B-2s to ensure there is not some primary fault developing in the 21-strong fleet. The two-crew members on board the bomber managed to eject safely before the crash, which occurred at 10.40am Saturday near Andersen Air Force Base, on the American island territory, 3,700 miles southwest of Hawaii.

The B-2, which can carry 50,000 lb of ordnance and can drop up to 80 bombs in a single run past a target, is equipped to carry nuclear weapons.
Source