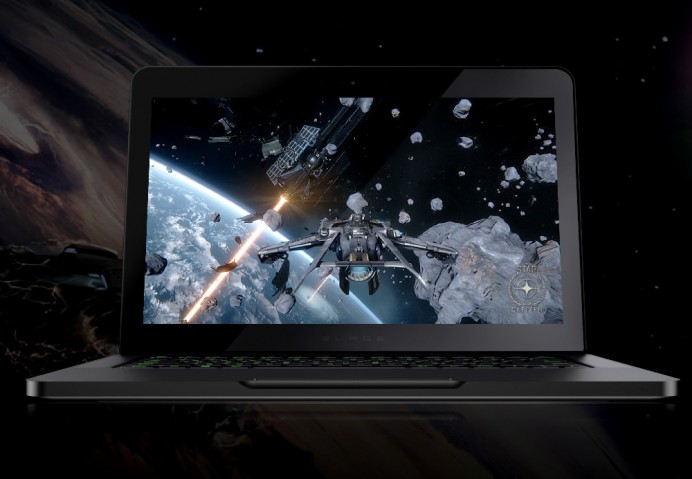 The world’s thinnest and lightest 14-inch gaming notebook i.e., the Razer Blade just got an upgrade. Loaded up with the latest Core i7 Quad Core processors (2.6GHz) from Intel and NVIDIA, more memory and what looks like a new best-in-class QHD+ display (14-inch), the all new Razer Blade looks ready for action.

The new laptop comes with the latest NVIDIA GeForce GTX 970M with 3GB GDDR5 VRAM (powered by the next-generation NVIDIA Maxwell architecture) and state-of-the-art IGZO (Indium Gallium Zinc Oxide) display panel technology. Look out Retina Display! The Blade is designed to be ultra-portable and still manages to also include 16GB of 1600MHz DDR3L memory and solid-state storage with options for up to 512GB. All of this should ensure that gamers have speedy access to games and would also able to launch them a lot quicker and provide for improved power managementThanks to NVIDIA Optimus Technology the Razer Blade can automatically and seamlessly transition between NVIDIA graphics and Intel HD Graphics 4600 in the background, helping boost performance and battery life. The Intel Core i7 processor, can clock in speeds of up to 3.6GHz with the aid of Turbo Boost and the Hyper-Threading technology provides eight virtual cores for improved gaming performance.

Another great aspect of the new gaming laptop is that performance is driven by the engineering principles of localized heating. Dedicated thermal engineers at Razer have designed the new Blade to direct heat away from the main touch surfaces, sending it to areas that can dissipate heat quickly and are not commonly touched.

The engine for the Razer Blade is housed in a precision-cut CNC aluminum chassis, and features a custom-designed track pad and backlit gaming-grade keyboard that has anti-ghosting capabilities and programmable keys powered by Razer’s revolutionary Synapse software.

The Razer Blade is now available for order online from Razer or Microsoft Stores, and will be available in select Microsoft Stores from February 16th. Razer is offering a slightly scaled down model featuring only 8GB of RAM and a non-touch 1080p screen for $1999 while prices for the higher end editions range from $2,200 (128GB) upward