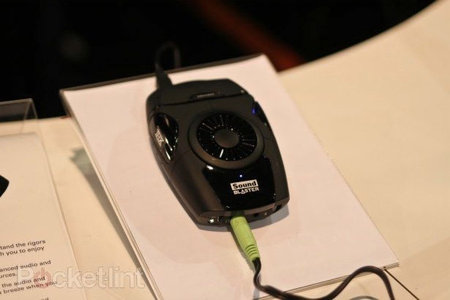 Yes, that’s all you need to do. An upgrade on your own headphones to get a THX quality performance while gaming! PC, Mac, Xbox 360 and PS3 users can upgrade their headphones with the new Creative Sound Blaster Recon3D, a new sound card dongle from the house of Creative. While the company already has three gaming headsets in its Tactic 3D range, Creative has now used the technology and made it possible for users to use their own headsets and headphones instead.

The Sound Blaster Recon3D comes in a tough durable body to “withstand the rigors of LAN parties and gaming tournaments.” It also includes the Xcourt Mode that tunes the audio and optimizes it for First Person Shooter games as well as the THX TruStudio Pro technology for PC and Mac users. No word on pricing as yet.
[Pocket Lint]