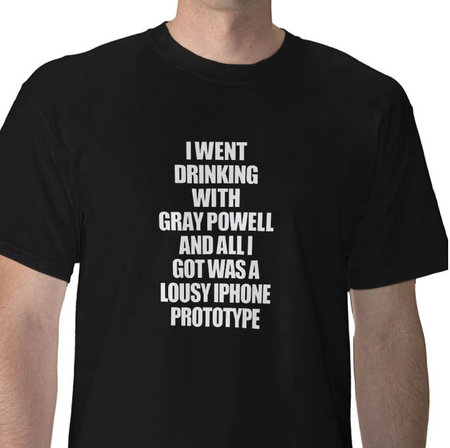 Gizmodo’s recent iPhone 4G exclusive has been generating quite a bit of publicity for the up coming iPhone and a certain Mr. Gray Powell who just happens to be a software engineer employed with none other than Apple. The word is, according to Gizmodo, that Mr. Powell while enjoying a drink of German Beer was updating his Facebook status on what is now quite certainly proved as the iPhone 4G. Unfortunately for him, he ended up leaving it behind at the bar and fortunately for the next guy, he ended up selling it to Gizmodo. Gray Powell has now become a legend in his own time for being the guy who mistakenly leaked the iPhone 4G to the world. He’s even got his own custom T-Shirt on Zazle.com that says – I Went Drinking With Gray Powell and All I Got was a Lousy iPhone Prototype. That’s pretty harsh and more so since each Tee will set you back $25.85 a piece or $16.80 if bought in bulk. I doubt Mr. Powell will be drinking any more of that German Ale henceforth.