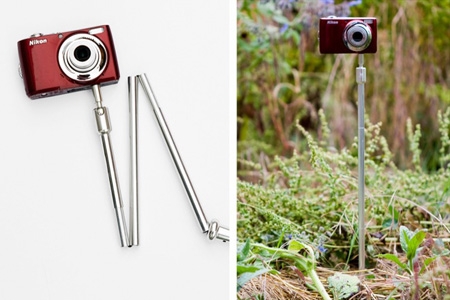 Twig Pod is a perfect monopod for those who hate weights

Bringing an idea of weightlessness in a monopod can lead to some rather expensive compromises, especially on cost. The Photojojo Store has made this a past issue now, with the introduction of their Twig Pod monopod that is not only light in weight but also quite affordable. Basically, it’s best described as a 25-inch pointed metal stick that weighs less than half a pound. Like an antenna, it can collapse to a reduced size of just 8-inches. Being pointed makes it easy to plant this one to a surface and shoot steady picture. The ball-head mount will ensure that you have the angles you would like to shoot.

It weighs just 230 grams, but the $28 Twig Pod can be one great outing companion. It’s a pure utilitarian.
Wired