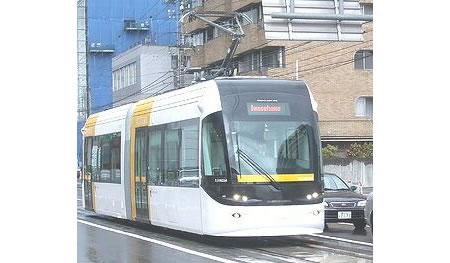 Tram runs on Lithium battery and recharges in under a minute

The Railway Technical Research Institute in Kokubunji, Tokyo, has developed a streetcar powered by a lithium battery that can recharge in under a minute. The institute will start conducting test runs in Sapporo at the end of November to check the streetcar’s capacity. Powered by the onboard battery, the vehicle runs at a maximum speed of 40 kph for 15 kilometers and is capable of converting 70 percent of its deceleration energy into electricity, which it sends back to the battery. The rest of the power is supplied by recharging stations, where the streetcar connects its pantograph to overhead wires.

The streetcar powered by a lithium battery has been designed to be barrier-free and has a low floor. According to the institute, it uses about 10 percent less power than existing streetcars. In 1987, when the Japanese National Railways(JNR) was privatized and divided into seven Japan Railways(JR) companies, the Railway Technical Research Institute and the Railway Labor Science Institute were merged into one railway research center- the Railway Technical Research Institute.