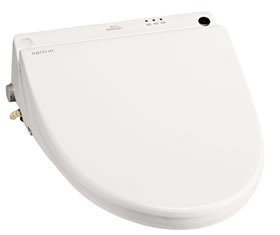 An upgrade to the N5A toilet seat here is a much more advanced toilet seat from Toto Japan. The new Apricot has more functionality and the best part it is even easier to clean. The new wall mounted remote control is easier to operate as instead of tiny buttons the controls are spread over the four corners and can be operated with the palm of your hand. The reverse side of the seat is made of water repellent resin so it always remains dry and clean. The seat saves on power as MP3 playback and seat warmer are activated when your presence is detected. Coming to the MP3 player it comes preloaded with a couple of Japanese tunes along with nature sounds like humming of a bird, beach waves etc but again you can load up your favourite songs via the SD card slot. It has a unique fragrance dispensor which upon detection release the perfume from four different slots thus filling the room with it. After a night of partying you dont have to worry about cleaning the toilet as it also has a light sensor which illuminates the toilet in absence of light so you know where to aim.

However my favourite feature is the Read / Write light similar to the ones you have on planes, the spotlight attached to the remote control throws off a soft light which is sufficient for some serious reading. Good things are never cheap as the new Toto Apricot F5A toilet seat will sell for 198,450 Yen ($ 1650).