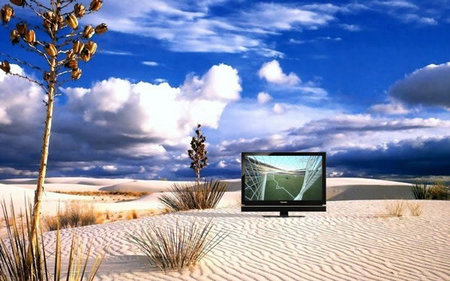 Here is a new innovation from the house of Toshiba! The company has announced its new Power TV family of battery-powered LED TVs making them the world’s first LED TVs to incorporate an integrated battery that is good for two hours of uninterrupted viewing. According to Toshiba, the Power TV has been designed particularly for developing countries that may lack a reliable, uninterrupted power supply and come in 24- or 32-inch models. To strengthen signal coverage in poor reception areas, the TV’s also include an ‘auto signal booster’ to optimize image quality and to conserve battery power and an ‘auto view’ option which include an ambient light sensor that adjusts brightness according to need.

The Power TV is one of three new series launched by Toshiba. Other two include the new 55-inch 55ZL800 3D LED flagship TV with new multiprocessor CEVO Engine as well as its 29-mm deep WL700 series of slim LED TVs available in 46- and 55-inch models.
How the Power TV will operate if your show box or DVD player does not, is yet to be decided. But we’re pretty confident manufactureres will line up an innovative solution soon!
[Engadget]