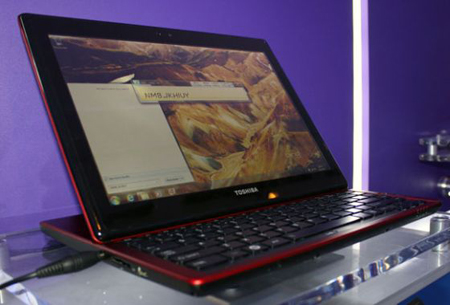 When it comes to highlights by Microsoft, at CES 2012, you can well count them on your fingertips. That’s why when the focus moves on to something like the Toshiba Protege M930 convertible Windows 8 Tablet, you ought to to take notice. It comes as a 13.3-inch tablet with an Intel i5 Core processor, 4GB RAM, 256GB SSD, and a peculiar style of shape shifting to become the tablet by folding backwards. It weighs just over 4 pounds and doesn’t seem to have the lightness and agility you may look for in a tablet with an attached keyboard.

The Toshiba Protégé M930 convertible Windows Tablet was at display at CES 2012. Strangely it was at the Microsoft stall, rather than the Toshiba outlet.
Good E-Reader