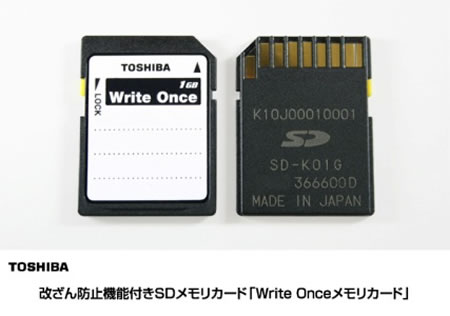 We aren’t largely impressed with anything that’s write-once, Toshiba’s new Write Once Memory Card, that works like a non-rewritable CD, might be what you need at governments, police and other entities need to record tamper-free data. With a storage size at 1GB against a CD’s 700MB, photos and data could be stored on this card and couldn’t subsequently be changed. Wouldn’t be surprised if we see film lovers to come to digital, which allows for more storage limits.

Convenient as it might be, can’t imagine everyone shifting to USB thumb drives. As if it isn’t everywhere already!
[Wired]