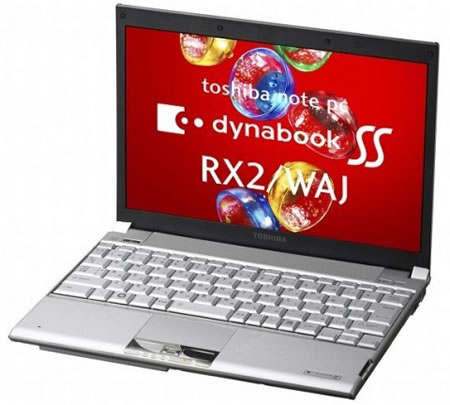 Toshiba Corporation announced the introduction of the top-of-the-range Dynabook SS RX2/WAJ. It is the world’s first PC to integrate 512GB SSD (Solid State Drive). The new model is available in two versions on Toshiba’s online shop for the Japanese market. It employs a 2-bit-per-cell multi-level NAND flash memory to realize, the world’s largest capacity SSD, with four times the density of SSD integrated into currently available products. The data access speeds has been increased approximately by 230% for read and by 450% for write. SSDs are free of mechanical structures such as a rotating disc, and ideal for integration into mobile notebook PCs, making them more resistant to vibration and shock.

The Dynabook SS RX2 mobile notebook PC weighs only 1095 grams and has dimensions of 19.5mm x 25.5mm, long battery of upto 12 hours. Integration of an SSD reinforces the hallmark performance excellence of the RX2, making the notebook perfect for use on the go. its ultra-low voltage CPU helps to achieve energy saving by cutting power consumption. The screen is transreflective LCD which means it will use the sunlight to brighten up the screen and hence cuts down the option of switching on the backlight.
[Toshiba]