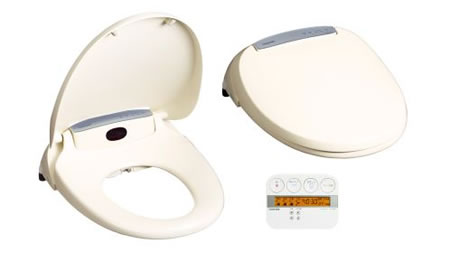 We have seen toilets with MP3 players and now Toshiba has developed one with a remote control. The company will launch a bidet-style toilet equipped with a newly-developed instantaneous water heater on Nov 23, 2007.The new toilet instantly warms up water every time it is used. The shape of the lid is elaborated so that it prevents heat loss from the seat. As a result of these innovations the annual power consumption is reduced by about 55% compared with that of the former products. The heating unit embedded in the joint of the seat does not take much space with its small and long tubes meandering inside. And water flows through the tubes, enhancing the heat conduction efficiency. A timer controlled power saving function turns off the heater for the seat in the hours when the toilet is hardly used such as in the night. The new Toshiba toilet is equipped with a variable-speed deodorizing fan motor, whose “speedy deodorizing” function blows three times as much air as normal.

Silver-ion water is used to automatically wash the wash nozzle. The lid automatically opens and closes when a sensor is tripped. And it is also possible to open and close the seat by using a remote control so that users do not have to touch the seat at all.The new Toshiba toilet models SCS-S510 and SCS-S500 measures 429 x 541 x 144 mm, weigh about 4.3kg and is available in pastel ivory color. Only model SCS-S510 features the automatic opening and closing of the lid and seat and speedy deodorizing.